In 2005, as my graduate school journalism project at Ball State University in Muncie, Ind., I published an original Midwest goth and industrial music magazine called Echo Immortalis, which I founded, wrote, edited, and designed. With the help of freelance writers and photographers, I successfully published three 56-page, full-color issues of the music magazine until 2007, when I ran out of funding for the grassroots journalism project. However, the experience it taught me has helped propel me throughout my writing career. 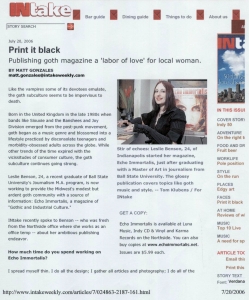 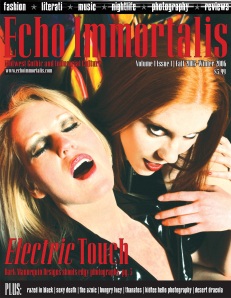 InTake, published by The Indianapolis Star, featured an exclusive interview with me (Leslie Benson, the founder of Echo Immortalis magazine) in 2006. Read “Print it Black” here.

Critique by Samir “Mr. Magazine”™ Husni, Ph.D., the director of the Magazine Innovation Center at the University of Mississippi, School of Journalism (http://www.mrmagazine.com):

"Greet each morning with curiosity and hope."