On the road from her Sinful Attraction Tour, Tori Amos discussed creative forces, spirituality, celebrity motherhood, and what it means to be a woman in music. I was fortunate to interview the songwriter for Nuvo in 2009, in preview of her summer concert at the Murat Theatre. She was soft-spoken and humble over the phone but a whirlwind of fire and energy on stage—a truly brilliant, creative force.

Excerpt: On her tenth studio album release, the self-produced Abnormally Attracted to Sin (Universal Republic 2009), Tori Amos spins a few more stories about the menagerie of characters she’s been collecting since her 1992 debut, Little Earthquakes. She explores the lives of women on different spiritual and emotional paths: from the wantonness of the seductress and the voyeur to the innocence of the choir girl.

On the cover of the album, fashion photographer Karen Collins portrays Amos as an empowered being, self-composed and dominant; accompanying press images depict her as poised between passivity and aggression, caressing, in the photo included with this story, every vampire’s favorite erogenous zone.

While her new album is slightly less concerned with politics than prior releases, Amos’s songs remain personal and filled with metaphors of divinity. Abnormally Attracted to Sin compiles observations of the pressures people place on themselves and that are placed on them. Amos’s work might be considered one long song about self-definition, about becoming a fully-realized, authentic woman apart from oppression. The haunting “Maybe California” calls out to mothers, like Amos, to save themselves from a despair attendant with sacrificing one’s identity to one’s family.

“When that song came to me, it was at a time when I was seeing mothers—not just one—asking, ‘If I wasn’t here anymore, would it be better for my family?’ I began understanding the gravity of that statement,” Amos says. “These are women who lost everything—whose kids couldn’t go to college, whose husbands had lost their jobs. So many women are so close to jumping over the edge. In songs like ‘Ophelia,’ ‘Maybe California’ and ‘Starling,’ there is great suffering. You have to wonder what it is that’s going to step in… . For me, it’s always the songs that step in.” 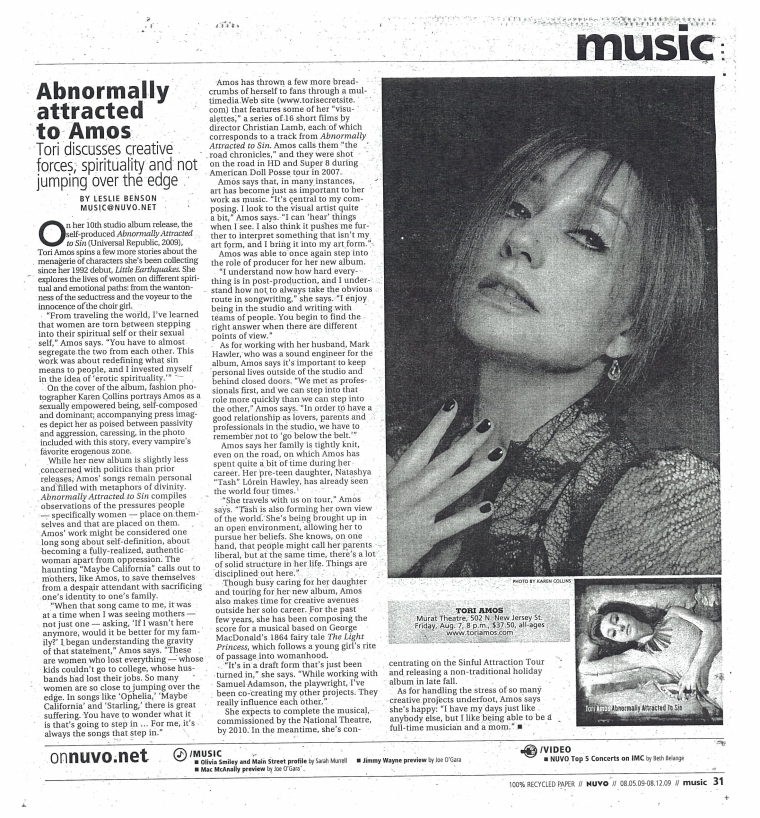