Interviewing rock and roll royalty comes with perks and challenges. I was extremely nervous when I waited for the phone call from Deborah Harry‘s agent for the Nuvo interview in 2007. But once I calmed my nerves and loosened up, I enjoyed a vibrant conversation about fashion and music with the singer of Blondie—a woman who inspired platinum hair and cut-off t-shirts, along with pop and early hip-hop anthems (e.g. “Rapture”). She was punk chic before there was a name for the style. And somewhere during our interview, I managed to make Blondie laugh. What more reward could a music journalist ask for than to have a meaningful conversation with one of their idols? Harry talked to me about her new CD, her tour, and the social issues that make her tick….I’m a lucky girl.

On the luckiest day to get married this year, July 7, 2007 — at least according to astrological charts — New Yorkers found another reason to celebrate. It was the thirtieth anniversary of the birth of punk rock in the U.S., as well as the thirtieth anniversary of Tish & Snooky’s Manic Panic N.Y.C., a raucous hair-dye and makeup company that’s been around for punk music scenesters since the beginning.

If you wanted to pull off the original New York punk look nowadays, you’d be wise, if female, to mimic Deborah Harry of Blondie. But you’d need a set of pipes to back up your new rocker persona.

Blondie’s early backup singers, Tish and Snooky, played CBGB with Harry, eventually selling the club’s merchandise and their own hair-dye in America’s first punk boutique. But the fashion-forward Harry’s career exploded even farther than her counterparts in the new wave and pop music scenes, starting her with first U.S. hit, “Heart of Glass,” in 1979. But media focused on her fashion forwardness just as much as her unique pop-rock-early rap crossover sound.

“I’m really surprised about that. I love fashion and clothes. It’s part of rock and roll,” says Harry, 62. “In a way, I was there at the beginning of a trend and became famous without even trying.

Today, Harry says she avoids worrying about what she’s wearing on stage so she can focus, more importantly, on her music and the technical side of performing. “I don’t really have the luxury of reminiscing,” she says.

But after 14 years, the singer has finally released another solo album, the esteemed Necessary Evil (Eleven Seven Music). She’s especially pushing her first single, “Two Times Blue,” a lovelorn anthem. “And I’ve been hearing good reports about the title song and ‘Dirty and Deep,’” she adds. “[It’s] about scandal and the feeding shark frenzy of the media. I’m guilty of it too.”

This fall, Harry launched her tour from L.A. to Miami in support of Necessary Evil, on the coattails of her cameo performances in Cyndi Lauper’s True Color summer tour for AIDS awareness, which hit Chicago’s Auditorium Theatre June 12 with The MisShapes, the Dresden Dolls, Erasure and others.

But AIDS education is not the only issue that gets under Harry’s skin.

“I’m really active in [fighting] ecological problems, getting away from pollution and getting into greening. I just made a public service announcement for a conservation group in New Jersey, and I’m part of a group that stops industry from dumping into the Hudson River,” Harry says. “Another issue I’ve touched on slightly is religious fanaticism. Our country is based on freedom of choice!”

For her, that also includes the ability to choose what music to listen to, and Harry has many favorites. “The beauty of rock and roll is we all listen to different things and amalgamate our influences,” she says. “So, it’s pretty much current: Bats for Lashes, LCD Soundsystem, Smashing Pumpkins, M.I.A.”

Reaching international acclaim long before the artists currently making rounds in her CD player, Harry and her band recently received notoriety from the Rock and Roll Hall of Fame in Cleveland when the museum inducted Blondie in 2006.

“I’m really proud they recognized us,” Harry says. “We made some vital contributions to pop music, [like] how we combined different styles. A lot of that credit should go to Chris [Stein]. He’s the one who wanted to do ‘The Tide is High’ and the rap song, [‘Rapture’].”

Harry is once again collaborating with Stein. He’s even named her the godmother of his children. “He’s a very funny guy, and I’ve always enjoyed his company and the things he writes,” she says.

Other projects Harry has been involved in include having contributed to the musical version of Desperately Seeking Susan, which debuted in London. A film is also in the works about Harry’s rocker life. She hand-picked actress Kirsten Dunst to portray her in Blondie. A release date has not yet been set. 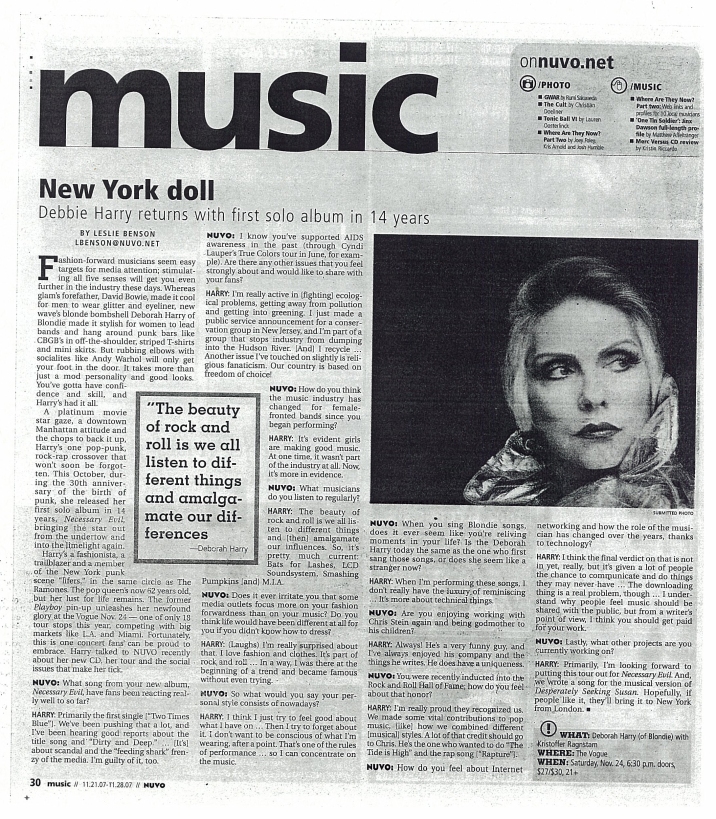 "Greet each morning with curiosity and hope."